Boston Eagles Hoping To Maintain The Luck Of The Irish

When Boston College Eagles take to the field on Saturday next, in the Aer Lingus College Football Classic, they will be carrying the hopes and wishes of many Irish fans both here and abroad. The university has close links to the Emerald Isle; and Experience Gaelic Games! Hundreds of BC students and alumni have learned the craft and culture of Irish sport through Gaelic Football, Handball and Hurling. On Saturday they will be put to the test.

If there was one US institution that demonstrates the close links between Ireland the American its Boston College. Not so surprising then that in the first of five previous College Classics in Dublin, Boston Eagles featured in the maiden venture.

There can only be one first and Boston’s unique link with Ireland was cemented with a 38-24 victory against Army. It was the shining light in another wise disappointing season which saw them finish 3-8. Following their trip to Ireland Army returned and qualified for the Sun Bowl going down to Alabama in El Paso, Texas. With the Irish Summer still lingering the 2016 Dublin Classic could well turn into an early season Sun Bowl!

Being based on the eastern seaboard, Boston, was uniquely placed for many Irish immigrants. It was the first port of call for hundreds of thousands of emmigrants’ Irish over the centuries. There isn’t a street in Boston that hasn’t housed an Irish person. Or a district that hasn’t seen an Irish Pub!

Gaelic Games are central to the way of life for Irish Bostonians. Thirty-three Gaelic Clubs make up the North Eastern Division of the North American Gaelic Board. All are based within the environs of Boston. At Experience Gaelic Games we are always delighted to hear when patrons return to Boston and immerse themselves in Gaelic culture. Boston Eagles may well return to play Hurling or Gaelic Football and add a Gaelic Inter-Collegiate pennant to the trophy cabinet at Chestnut Hill.

Steve Addazio may not have any Irish heritage but his linebackers may well be ancestors of the great Irish-American sporting superstar John L. Sullivan. The Boston Brawler who was the undisputed king of bare knuckle boxing. He typified what it meant to be Irish. A fighting spirit, transcended from generations of Irish-Americans, in the North American city.

A Gaelic Boston Line Out

A mere glimpse at the Boston Eagles roster gives you a sense of how Gaelic this team really are Freshmen Aidan Hegarty, Sean McFadden, Sean Ragan Jimmy Martin, Shane Leonard and Gabriel McClary could make up a defensive unit on a Gaelic Football outfit in any part of Ireland. Couple this with Jack Galvin, Jack Kenny, Ray Smith, Tommy Sweeney and Jimmy Lowery you have the makings of a generic Gaelic team Hurling or Football. 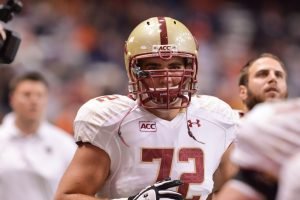 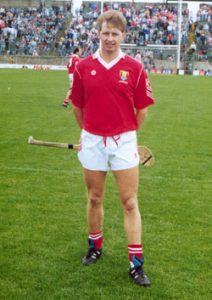 In all the one hundred strong outfit, the Eagles will bring to Dublin, two names stand out above all. Those of Jim Cashman and Mike Palmer. Six-foot-seven tall offensive line, Cashman, is in his senior year. He excelled in taking fifty-eight snaps in his Junior season. His name is synonymous in the Gaelic world already. Between 1985-1996 Jim Cashman was one of Irelands leading hurlers. Excelling, like the offensive giant from Haddonfield, NJ, he lorded at centre-back; and was instrumental in bringing two All-Ireland Hurling titles to Cork in 1986 and 1990. Saturday could see the rebirth of another Jim Cashman legacy on Irish soil. 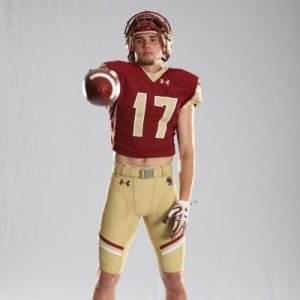 Should Freshman Mike Palmer from Endwell, NY, make his Eagle debut as a Defensive Back on Saturday afternoon he too will carry on the legacy of his namesake; affectionately known as Micksie Palmer. Like the Six-foot-one high school superstar from Maine, Micksie Palmer was a teak tough corner-back for Kerry’s Gaelic Football side of the 1950s winning national honours in 1953 and 1955; a man who took no prisoners and played with style and abandon. The stage is set for Micksie II to take up the mantle!

All said Boston holds a unique place in our hearts, and Ireland in theirs. We have genetic links and a deep pride of place that shine out through our sporting culture. The Eagles portray their passion through the game of Football. We symbolise ours through Hurling and Gaelic Football. We are separated by a wide ocean but our names are similar; our games will bring us together! Lets play!