Family Fun for all! 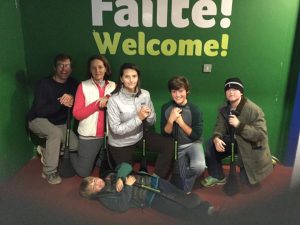 Family Fun for all!

Coming to Ireland on a family vacation? Then you must make it your priority to sample Gaelic Games via Experience Gaelic Games. Do as the Irish do! It’s family fun for all!

If ever a sporting culture mirrors family life – its Gaelic Games. Deep rooted in tradition its core values typifies that of family bondage. There is a place for everyone in the Gaelic family under the same umbrella. Uniquely Gaelic games offers both a sporting and cultural lifestyle to its participants. A trip to Experience Gaelic Games will showcase that fact.

You will learn about the games; namely Gaelic Football or Ladies Football for the females, Hurling and its sister game of Camogie (Ladies Hurling) and Gaelic Handball which in itself is unique as it is the hidden gem of the games within Ireland.

We at Experience Gaelic Games have been delighted by the reactions and spirit shown to our native games by Family groups over the years. Families of all ages and sizes from as small as four to as large forty-odd have delved into the Gaelic world together. Our sessions last three hours but we have an abiding belief that the memories last forever.

Throughout the island of Ireland, families portray Irish sporting culture via Gaelic Games. On the field of play it wouldn’t be surprising to see a father and son or mother and daughter on the same team. In rare instances, it has been noted where three generations of the same family played on the same team!

Celebrities are created via sporting exploits. In true Gaelic manner, the players of today display their talents and exhort every ounce of energy for the pride and honour of their home place. There is no monetary gain. No million dollar deals. They play to maintain the values handed down to them in the hope that when their careers have ceased that the next person will carry forth the same pride and passion in the jersey as they did.

In an age where we have become ‘modernised’ by technological advancements and urban living; it is deeply hearting to know that ancient tribalism is alive and well in Ireland. Over 2,000 Gaelic clubs dot the Irish landscape. Each one holds a bond within themselves that strives for the honour of their native land.

Your Day To Play

So, if your heading to Ireland, you must make it your priority to sample the delights of Gaelic Games via Experience Gaelic Games.