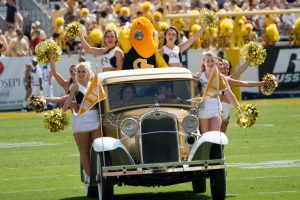 On Saturday, Georgia Tech will wheel the Rambling Wreck onto the grid-iron at Dublin’s, Aviva Stadium. It will signal their arrival to the Aer Lingus Classic. The beginning of a new season for the Coastal Conference outfit promises much. Before all that they will get a taste of Irish sporting culture via Experience Gaelic Games.

Georgia Tech and the Gaelic Athletic Association have a few similarities. They were founded within months of each other; the GAA in the winter of 1884 and GT in the fall of 1885. Today both are pillars of society in their respective jurisdictions.

Atlanta has become a hotbed of Gaelic activity in recent years. Hosted by Clan Na Gael CLG – Atlanta, the Peach Cup is as important to the GAA fraternity in Georgia as its Peach Bowl equivalent in American Football. It vibrates around the south-east shores bringing together our overseas Gaelic warriors each June.

While the GAA blossomed in the years after 1884, it wasn’t until 1892 that Georgia Tech established themselves on the field via College Football. Today four National titles stand by their name. In the early 1900s Bob Heisman gave sixteen seasons building the Yellow Jackets. Today the Heisman trophy for the best College Footballer of the season is named in his honour.

What we in Experience Gaelic Games are anxious to see is have we a Heisman trophy man in our presence. Two days before GT face BC we will be showcasing Gaelic Games to the 120 strong outfit. Which Yellow Jacket will swarm out and become the Gaelic Warrior of noble renown on the day?

Switching codes for College Footballers is alien today. There was a time when they mixed Baseball, Basketball and Athletics within their University curriculum. Bo Johnston and Jim Thorpe managed to excel in them all. Gaelic players, on the other hand, are able to play their hand at both Hurling and Gaelic Football with many dabbing their hand at Handball also. The trio represent the ultimate workout for Gaels!

Power Of The Irish

Gaelic Games demonstrates the power and resolve of the Irish race. Quick reactions lead to moments of brilliance. GT – Yellow Jacket Quarter-Back Justin Thomas will be hoping to take in all the Gaelic attributes of quick feet and fast reactions to link up with Wide-Receivers Brad Stewart, Ricky Jeune, Freshman – Mikell Lands-Davis or Christian Philpott; who would be known as Christy Philpott in Gaelic terms after a former Clare hurler of yesteryear!

Paul Johnston needs no reminding of the power of the Irish. In two previous stints he manned the sideline for Navy. Their rivalry with the Fighting Irish of Notre Dame needs little introduction. Twenty years ago he landed in Dublin to take on the arch enemy. A 54-27 defeat was their lot on that occasion. An awaking of the Gaelic Spirits through Experience Gaelic Games could swing the laurels in Johnston’s favour this time round!

The stage is set for an almighty carnival and showdown between two giants of College Football. When the Rambling Wreck wheels onto the turf of the Aviva Stadium on Saturday all will be in readiness. Every eventuality cautioned by Johnston & co. The Gaelic men and women of Peach Cup fame will be watching, hoping and wishing the Yellow Jackets take the Irish Classic back to Atlanta.