‘Completely dominant in the air, he gathers the ball. He glides past the first tackle, the second, the third and lays the ball off. Here comes the defender, Kevin Moran, in one of his typical forays into the attack. He takes a one-two. Can anybody stop him? He takes on the 4th man. Lays it off to the onrushing forward. Goal!’ 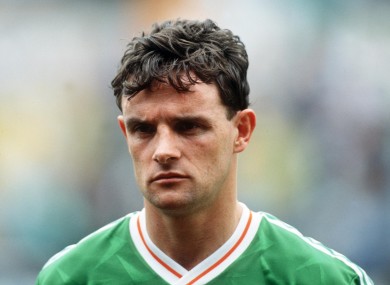 Does anybody remember this commentary about Kevin Moran? Ok, you’re right, I made it up. However, if you dive into the archives I’m sure you will find numerous commentaries like this about one of Dublin’s most famous sons. Did I make this up with the GAA or Soccer in mind? You’re right, both!

Very rarely have we seen a dual star like Kevin Moran on our small island. He’s won All-Irelands with Dublin. FA Cups with Manchester United. Scored goals for Ireland. Give him a table tennis bat and he’d probably be a world champion. Such was the natural ability of the man.

Also, he carries an unforgettable accolade that might help you in your online quiz during this Covid 19 lockdown. He is the first person ever to be sent off in an FA Cup final for his tackle on Peter Reid. His tackle was categorised in the ‘no nonsense’ type, doing anything to prevent a goal. Maybe he thought Peter Reid was a Kerry man? I don’t blame him so!

But enough about Soccer and Kevin Moran’s exploits across the pond, we’re going to look at what made him a household name, a hero, a man of the people in Dublin. In an article by Paul Kimmage, about Moran he said ‘they don’t make ‘em like him any more’. Along with being the first player to be sent off in an FA Cup Final, Moran was also the first ever player registered with an English soccer team to play in an All-Ireland Final. So, in 1978, just after signing for Manchester United, Moran returned home to play in the All-Ireland final for that year. With the demands on soccer players in todays game, I doubt that feat will ever be repeated.

Born in Rialto, Moran grew up for the most part in Drimnagh, attending James’ Street CBS and Drimnagh Castle CBS. In these two schools, Gaelic Football would have been the dominant sport. He also played for Good Counsel. During a game in O’Toole Park for Good Counsel is where he was spotted as a prodigious talent, one which would be of huge benefit to a Dublin team struggling to get over the line consistently.

In 1975, Kevin Moran sat in a pub after Dublin lost to Kerry in an All-Ireland final. He and his friends cursing the way his beloved Dublin team had thrown the game away by not playing to their potential. He didn’t realise it then, but he was about to be brought up to the team to become a fulcrum of the defence. Despite playing in a World Cup, games against England, FA Cup finals and a host of other huge soccer games, Kevin Moran always maintains that his favourite game of all-time was the 1976 All-Ireland final against Kerry. Highlights of the game can be seen below.

The first clip, with Moran wearing number 6, the sheer athleticism and footballing ability of the man is evident. He drives through the defence and unleashes a thunderbolt which just about goes wide of the post. They went on to win the game, with Moran winning man of the match in his first championship final. According to the interview with Kimmage, about the game, Moran said ‘you are born in Dublin, you’re from Dublin, you’re representing your Dublin team and it’s an All-Ireland Final. It’s your first ever, and you’re playing Kerry, and there’s a key to it as well – you’ve won. When I’m pushed and asked to pick one game, it would be that one.’

In 1977, Moran again played centre stage as Dublin retained their title. With the icon that is Kevin Heffernan in charge, Dublin gave Armagh a hammering on the day, running out 12 point winners. Who would have thought it at the time, but it was to be Moran’s last All-Ireland title. With Manchester United calling, Moran then decided to test his skills across the water for one of the World’s most prestigious clubs. Having achieved his dream in Ireland, he would go on to bigger and better things on the World stage, with the Dublin managers cursing their luck at having lost one of the greatest athletes of their generation.