Ireland is bracing itself. The form has been sent in; the plan is ready to be implemented. The stage is getting set. Let’s be having you. Rugby World Cup – Ireland 2023; in the heart of Gaelic Games.

While the Rugby World Cup 2023 is a distance cloud in the winter of 2016; we at Experience Gaelic Games have long being introducing Rugby teams from across the globe to our native sporting culture. In fact one of the first to feel the warmth of our nations sporting culture was the Fijian Rugby team – it was one step on their Olympic Gold success in 2016.

The English, Welsh, Scottish, and French have been brightening our doorstep at Experience Gaelic Games in anticipation of 2023 for a number of years.

Rugby Schools, Universities, Clubs and Societies have all sampled the delights of Gaelic Games. The majority return on annual basis; to perfect the skills of Gaelic Football – we are told line-outs and Garryowen’s are now becoming faultless due to the attributes picked up from Gaelic Football. A mere coincidence we think! 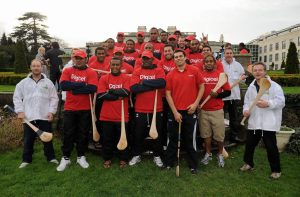 Fijian-born Cork hurling star, Seán Óg Ó hAilpín, with members of the Fijian team on a visit to the Fijian Rugby team at its camp in Dublin. Picture credit: Brendan Moran / SPORTSFILE

It is not just the Europeans that have been knocking on our door. A week doesn’t pass

at Experience Gaelic Games in Dublin, Galway or Cork that we don’t encounter a Rugby team from across the world. Touring teams from South Africa, Tonga, Zimbabwe, USA, Canada, Uruguay and even Brazil have coupled Gaelic Games into their itinerary. And immersed themselves in Irish sporting culture.

The Houses The Gaelic World Built

While the present Rugby grounds of The Aviva Stadium and RDS in Dublin along with Belfast’s Kingspan-Ravenhill and Limericks Thomand Park are included in the bid; it is the Gaelic grounds that have generated the most interest. 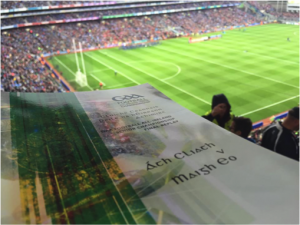 The most famous is Dublin’s Croke Park; a stadia that witnessed arguably the most emotional day in Irish sport since Italia 90; when they staged England at GAA HQ in 2007. Ireland being England’s nearest colony naturally had turbulent relations with the English; which led to many wars and conflicts between the two nations. That game buried a lot of tension both real and imaginary; and remarkably opened the link between Rugby and Gaelic Games in a lot of areas where the game was extinct since the foundation of the GAA in 1884.

Also included is Kilkenny’s Nowlan Park where Bruce Springsteen once famously played; on the same turf as the aristocrats of Hurling. The marble city treasures the most successful Hurling heartland on the planet. The Cats are to Hurling what the All Blacks are to the oval ball.

Into the west is Galway’s Pearse Stadium who are bidding to host the most westerly World Cup game in the annuals of the competition. The cities scenic beauty will leave you in awe. And don’t be fooled when they tell you the next parish is New York if you happen to lose your way to the ground!

Just north of Galway is McHale Park, Castlebar, home of Mayo GAA. A county that suffered most in terms of emigration, Mayo boasts the biggest overseas support base for an amateur team anywhere in the world. Their quest for a first All-Ireland Gaelic Football title since 1951 is the stuff of fairy lore.

Further north is Derrys Gaelic Park, a city vast in history, sport and culture. A city that has two names – Derry to the Irish and Londonderry to those who came in Ulster plantation of the 1600’s. Belfast is a city that has grown in stature since the Northern Ireland conflict concluded in the mid-nineties. Like Derry it is buzzing with history, sport and culture. Its GAA showground Casement Park is undergoing a major redevelopment in time for the Rugby World Cup 2023. The World Cup proposal demonstrates how relations between two communities have been harnessed together in a relatively short space of time.

To the south lies the Killarney’s Fitzgerald Stadium and Cork City’s Pairc Ui Chiomah. To the interlopers of Gaelic Games these two stadiums bear witness to the biggest rivalry in Gaelic Football on an annual basis. Its Manchester United v City, Texas Long Horns v A&M, or India v Pakistan. Its tribal warfare – the Munster Football final is to them what the Ashes are to the English or the Aussies. Being close neighbours the intermarriage between both counties has seen many a man go hungry due to his loyalty to his county colours. As they say in these parts – it’s pure sport boi! You will also have a new found appreciation for the English Language, and a different perspective on sporting culture, after a visit to Cork or Killarney – or any Gaelic Heartland for that matter.

Familiarise Yourself With The Gaelic World

It is less than seven years before the first ball is send into play for the Rugby World Cup 2023 . The judging commences in the weeks ahead. So why not familiarise yourself with the Gaelic world before 2023; by sampling the power and passion of Gaelic Games via a session with us at Experience Gaelic Games.