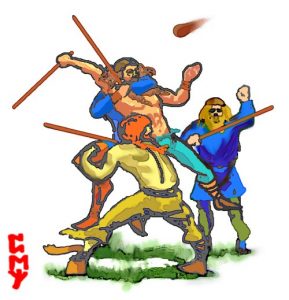 From the inception of Experience Gaelic Games a strong link with Scandinavia formed. So
much so that today visitors from all over Scandinavia who tour Ireland come to us to flavour the
delights of Gaelic Games. They leave with an appreciation of both Irish sporting culture and
the close links their own race has with Ireland.

We have a special relationship; as both the Irish and Scandinavians have been concurring
with each other for millennia. Our most vivid correlation formed around the Vikings who left
an ever lasting impression of Irish history.

Unknown to many is the sporting prowess of the invading Vikings. Naturally strongman
challenges were their forte coupled and their battlefield cleverness; which in turn formed
many combat games. Much of these can be still seen in the Scottish Highlands during the
summer carnival season.

A visit to Experience Gaelic Games will showcase Ireland’s ancient pastimes; Hurling being
our chosen stick and ball game. Records date to 1172BC, so much so by 2016AD, a unique
tribal sporting bond exists between the populace of Ireland and the game of hurling.

Patrons from Norway, Sweden, Denmark, Finland, Iceland and even a stag party from the
Faroe Islands delighted themselves in Gaelic Games. Spending a day as a Gael and rekindling
the same sporting and cultural passion their ancient ancestors possessed.

In olden times the Vikings had a stick and ball that was played with the same spirit and tribal
passion as Hurling is today. Knattleikr, as it is known, is still played in parts of Iceland and in
North America colleges. Norse culture enthusiasts are keeping the flame of the ancient
pastime alive.

No doubt both cultures had an influence on each of our chosen stick and ball games. Hurling
was coined from battlefield scenarios that forged a game. Knattleikr naturally was bred from
similar lines.

One look at a basic description of the game testifies that – Game-play involves a hard ball hit
by a stick, although players can also use their hands. Body contact is allowed in the fight for
the ball; where the strongest has the best chance to win. Thus, intimidation is a vital
ingredient; several war of words have been recorded by old sagas!

Without doubt Knattleikr was played in Ireland; as the Vikings gained a foothold here from
800-1000AD. Good Friday 1014AD was when we bid farewell to one another. It is doubtful
that a Knattleikr/Hurling compromise challenge ever took place. Sporting romantics amongst
us, fantasise that it did!

Is there a Knattleikr team out their planning to tour Ireland? A visit to Experience Gaelic
Games is a must to reintroduce the passion of Knattleikr to the Gaelic world again.